"I'm so glad I went with this company. They are so great!"

Summer Is Scorpion Season. Is Your Property Ready?

Summers in Arizona are infamous for high temperatures and sweltering heat. However, residents know that the weather isn't the only thing to worry about: in Mesa, summer is also bark scorpion season. These highly venomous pests invade homes, sneaking in through small spaces on the hunt for prey like crickets, roaches, and other scorpions.

If the thought of scorpions has been keeping you up at night, give Arizona's Best Choice Pest & Termite Services a call. We offer a free scorpion inspection. Our multi-pronged approach to scorpion control in Mesa can help you safeguard your home or business against these pests. Our residential and commercial pest technicians have years of experience and training in removing scorpions from homes in central Arizona.

Scorpions can be scary, but with the help of Arizona's Best Choice Pest & Termite Services, you’ll no longer have to worry. Our experienced and trained pest control technicians have years of experience removing bark scorpions from homes for good.

If you suspect you have scorpions in your home or yard, give Arizona's Best Choice Pest & Termite Services a call. We’ll dispatch a professional for a free inspection. Our technician will use a UV light and a knowledge of common scorpion hiding places to search for the pests and determine how severe the problem is. Once they’ve assessed the scope of the scorpion infestation, our specialist will meet with you to review your treatment options. At this point, you’ll receive an upfront, honest quote for how much the scorpion removal will cost.

Once you’ve accepted a treatment plan, our technician will get to work. We use Demand CS Insecticide. While safe after drying, Demand CS is 200 times more powerful than normal pesticides and doesn’t break down under the strain of sun or rain. The use of pesticides helps kill off the pests that scorpions are preying on, killing off their food supply. We’ll then advise you on how to block scorpion entry points, and we’ll lay down glue traps and other deterrents. By denying them entry, removing their easy access to food and water, and by creating a pesticide barrier, the combined treatments from Arizona's Best Choice Pest & Termite Services will put your home on the path to a scorpion-free future.

Since they’re unaffected by most forms of traditional pesticide, bark scorpions can be difficult to completely remove from your property. However, blocking their most common entry points can deter them from entry and deny them access. A home seal from the professionals at Arizona's Best Choice Pest & Termite Services can lock bark scorpions out by covering and sealing the most common routes for both them and the prey they typically follow. Combined with traditional pest control and other common-sense measures, a home seal is one of the best ways to get rid of bark scorpions. 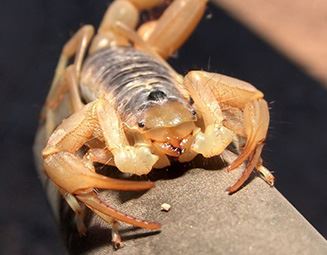 There are approximately 1,300 different species of scorpions worldwide, and more than 40 here in Arizona. However, it is by far the Arizona bark scorpion that gives homeowners the most headache. At first glance, the bark scorpion is smaller and less assuming than the larger scorpions seen in the Hollywood adventure films. Yet, it is highly venomous, capable of delivering a sting that is potentially life-threatening.

Bark scorpions have another unique quality: under exposure to UV light (also known as a “blacklight”), they glow a bright green color. This allows pest control specialists and homeowners to easily inspect for scorpions in the yard or house at night.

Our Most Frequently Asked Questions About Scorpion Control

Why are bark scorpions in my home?

Bark scorpions are nocturnal predators who enter your home in search of not only shelter but other pests, including crickets, roaches, and spiders. Thanks in part to their thick armor, normal pesticides are not as effective against scorpions as they are against other pests. However, the treatment Arizona's Best Choice Pest & Termite Services does include pesticides. By eliminating the bark scorpion’s food source within your home, they’ll be less likely to pay you a visit.

What happens if I get stung by a bark scorpion?

Most scorpion stings occur by accident when someone steps on or brushes up against one.

If you have been stung by a bark scorpion, follow these tips from the Mayo Clinic:

Technically, bark scorpions are considered potentially lethal. While most stings can be treated at home with the advice of a Poison Control specialist, some cause allergic reactions that require hospitalization. Deaths are extremely rare; since the 1960s, only two fatalities have been recorded in Arizona from a bark scorpion sting.

What are some precautions that I can take against bark scorpions?

Many Arizonans wear sandals when walking around their home at night in the summer so they don’t step on a bark scorpion. Others place the feet of beds and cribs in glass mason jars. Bark scorpions are adept climbers, but cannot grip glass surfaces. Only professional treatment can remove scorpions, however.

Why don’t I see scorpions in winter?

Bark scorpions hibernate during colder temperatures, congregating in groups of 20-30 to stay warm. It’s not impossible to encounter a sluggish bark scorpion in Arizona’s winter months—just less likely. A warm spring can bring out scorpions earlier than normal.

Where do scorpions hide?

Old storage boxes, piles of lumber, brick fencing, light fixtures, gardens, and leaf piles form ideal environments for bark scorpions. True to their name, they’ll also ascend trees around your property. When the sun is out during the day, they like to hide underneath large rocks in your yard to avoid the bright light and the heat.

With a low turnover rate, we pride ourselves in taking care of our employees. Join our team that's like a family!